In 1946, sixteen members of a Cooperative signed the Constitution for the establishment of Metallurgic Cooperative NIKO in the belief that they would preserve the several hundred years old tradition of ironworkers and nailmakers, and that they would renew and consolidate the industrial activity. The Cooperative continued the production of office products and general locksmithing which was started by Mr. Niko Žumer in his workshop at Trnje, Železniki.

The first hardware was very modest: machines for the manufacture of paper clips, drawing pins, automatic machines for staples, two presses and a few hand tools. The main products were drawing pins, paper clips, staples, steel file compressors, lever arch mechanisms, kitchen ranges and smoke control doors. In the first days of operation, they manufactured only six mechanisms per day, but after six months of operation, they already manufactured 300 pieces per day. They also moved into larger quarters in an abandoned barn at Racovnik.

In 1947, the production plan was complemented with the production of document punchers, they started producing connector compasses, document sewers and other small office products. A few years later the members of the Cooperative started conquering the production of laboratory apparatus, precision compasses and small electric motors.

In 1954, the Cooperative already employed 246 workers. It became important also in the Slovenian region, and therefore it obtained the permission to restructure their handicraft business to a company. It was renamed to NIKO – Factory of Metal and Electromechanical Products – Železniki.

In 1962, the company lost its independence. It was merged to the Iskra system, which was the leading Slovenian factory in the field of electromechanics and electronics.

In 1963, ironmongery work – stationery was eliminated from the production and NIKO regained its independence. The new NIKO obtained the old working premises at Racovnik and the production program was expanded to the production of lever arch mechanisms for files and folders, the production of staples, heat treated tapes and staplers. NIKO made the decision that the lever arch mechanism shall be the central, leading product and it shall be updated and produced with modern technology. The mechanism therefore obtained a new form, and the galvanized zinc coating was substituted by a commercially more beautiful nickel plated surface coating.

In 1977, the company moved into a new factory built at Otoki 16. A year later a new modern galvanics for nickel plating was built. 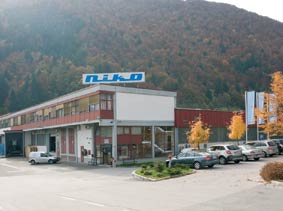 In 1989, NIKO transformed into a company with full responsibility, named NIKO p.o. It employed 364 people.

In 1996, after the successful implementation of the ownership transformation, the company became a limited company, named NIKO, d.d., Železniki with 290 employees. The main activity was still the manufacture of fabricated metal products, which was divided into 3 programmes: Mechanisms programme, Staples programme and Tool Shop programme.

In 2008, the Austrian group Ring International Holding (RIH) published the intention to purchase shares for acquiring NIKO, d.d., Železniki. RIH had already entered in the share ownership structure in the previous year. In 2010, it became the 100% owner of the company NIKO. 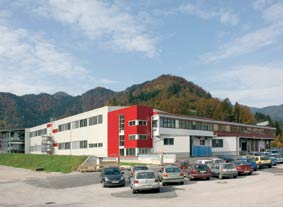 In 2011, RIH Vienna with 100% ownership transformed the company into a limited liability company by a decision of the General Assembly.

In 2013, company NIKO, d.o.o., Železniki with 235 employees in highly automated, partly even robotized production daily manufactures 500,000 pieces of mechanisms. NIKO is the largest manufacturer of lever arch mechanisms in the world. It covers about 22 % of the world market.

Final project: The development and industrialization of eco-innovative consumer products. PDF document of the project.

The project is partially financed by the European Regional Development Fund

How to reach us

We have prepared a few variants of active maps on how to reach our company.